Femicide in Mexico: “The Shadow Pandemic” 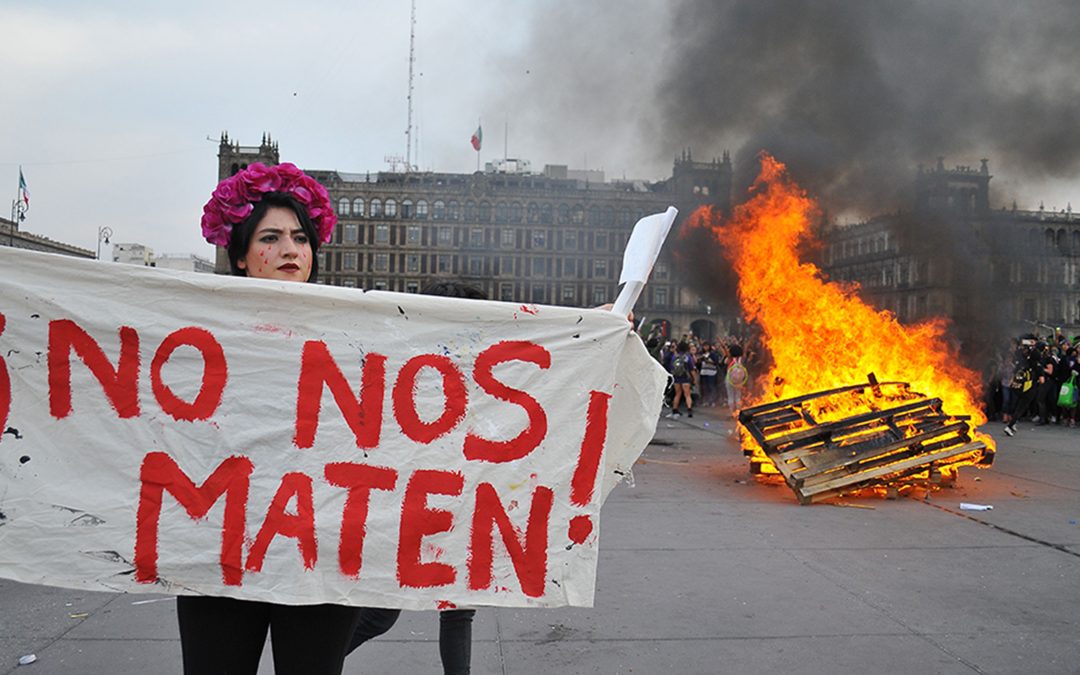 From the 1990s, there has been a dramatic rise in the murder of women and girls in Mexico. These violent murders are referred to as both the ‘femicide’ and ‘feminicide’. The terms were coined as a means of differentiating the gender-based murders from the term ‘homicide’, which is the Latin term for the murder of men.

As it stands, the mass murder of women in Mexico is second only to that of Brazil, with Mexican femicidal crimes climbing by 7.7% in the first half of 2020 in line with the Coronavirus pandemic. It is for this reason that the Mexican feminicide is referred to as the ‘longest epidemic of femicidal violence in modern history’.

The City of Dead Girls

The first reported victim of the feminicide was 13-year-old Alma Chavira Farel, whose body was found on 23 January 1993, in Campestre Virreyes, Ciudad Juárez. She had been raped, beaten and strangled to death. Two days later, the body of sixteen-year-old Angélica Luna Villalobo appeared in similar circumstances in Alta Vista, Juárez. In the following years, the border city became synonymous with violent female murders and earned the name ‘the city of dead girls’.

Today the city of Juárez is at the epicentre of global critical attention as bullets tear through the streets with de factodrug cartels battling for control. However, the mass murder of women, which started out as just a problem for Juárez, is now a national scandal, with approximately 11 feminicides taking place across Mexico every day.

In 2019, the Secretariat of Citizen Security recorded the violent murders of 3,752 women in Mexico. Worryingly, following the outbreak of the coronavirus, increasing numbers of vulnerable women have been seeking emergency help and protection from gender-based violence, with cases surging in line with lockdown measures. In 2020, it was predicted that the number of violent female deaths would supersede that of the previous years, with over 26,000  911 calls registering ‘gender violence’ in March 2020 alone (the highest on record) and the logging of 987 murders of females between January-April 2020.

Despite the ongoing brutalisation of women and girls’ bodies, President López Obrador (AMLO) continues to play down the spiralling number of female murders, and maintains that the sharp rise in domestic violence calls to emergency hotlines during the pandemic were ‘fake’. AMLO’s harmful comments, in which he referred to himself as a ‘humanist’ and not a ‘feminist’, coincided with an upward trend in social justice movements in 2020 such as #MeToo and #UnDíaSinNosotras. These movements came to fruition in response to the brutal murders of 25-year-old Ingrid Escamilla (who was skinned and disembowelled) and 7-year-old Fátima Aldrighett (whose body was found wrapped in a plastic bag after she disappeared from her school gates).

Despite finding itself at the centre of global and local condemnation throughout the 1990s and the 2000s, and once again in 2020, local and federal authorities still do little to challenge the misogynistic hate crimes that are devouring the women of Mexico. Behind this growing surge in gender-based violence lies a complex web of neoliberal policies, violence, organised crime, patriarchy, machismo and legal impunity, which when bound together, produce an environment ripe for feminicide.

While researchers may not ever be able to pinpoint an ‘exact cause’ for the feminicide, recent trends highlight that police corruption, government indifference, and more generalised spiralling rates of violence and murder, all fuel and feed the continuation of these gender-based crimes. Whilst the Mexican penal code outlines that feminicides can now be charged with 40-60 years in prison, a $2,000 fine and loss of inheritance, systemic impunity still reigns under AMLO, with 93% of feminicide crimes either not being reported or investigated, and with prosecution rates as low as 8%.

Getting Away with Murder

The epidemic of feminicide in Ciudad Juárez must be placed in a national context of uncontrolled violence from organised crime, patriarchal order, institutional corruption, and impunity. Contrary to popular belief, there is strong evidence that the feminicide that started in Ciudad Juárez is not a myth, and that, in fact, the epidemic of violence against women is spreading throughout Mexico, reaching its peak during the Coronavirus pandemic. Unfortunately, until President AMLO relinquishes his apathetic view towards distressed and angry calls for help and demands for social justice and change, it is likely that the number of violently murdered women and girls across the country will only continue to grow.

For now, the Mexican feminicide is taking form as a ‘shadow pandemic’, as much like the virus itself, gender-based violence is spreading across Mexico at an incalculable rate.

As a feminist organisation, Justice Studio stands in solidarity with women and girls across Mexico and beyond in their fight to eliminate gender violence and end systemic impunity. Having previously worked both nationally and internationally on women’s activism projects with clients such as, Comic Relief, SOLACE, the Royal Commonwealth Society, and Womankind Worldwide, Justice Studio is committed to empowering women and girls, ending gender violence and ensuring gender equality.

Jennifer Cooper is a Phd candidate at Royal Holloway, University of London, specialising in forced displacement, border politics and gender violence. She has published on the Mexican feminicide and Latin American visual culture, and lectured in the department of Humanities at RHUL.