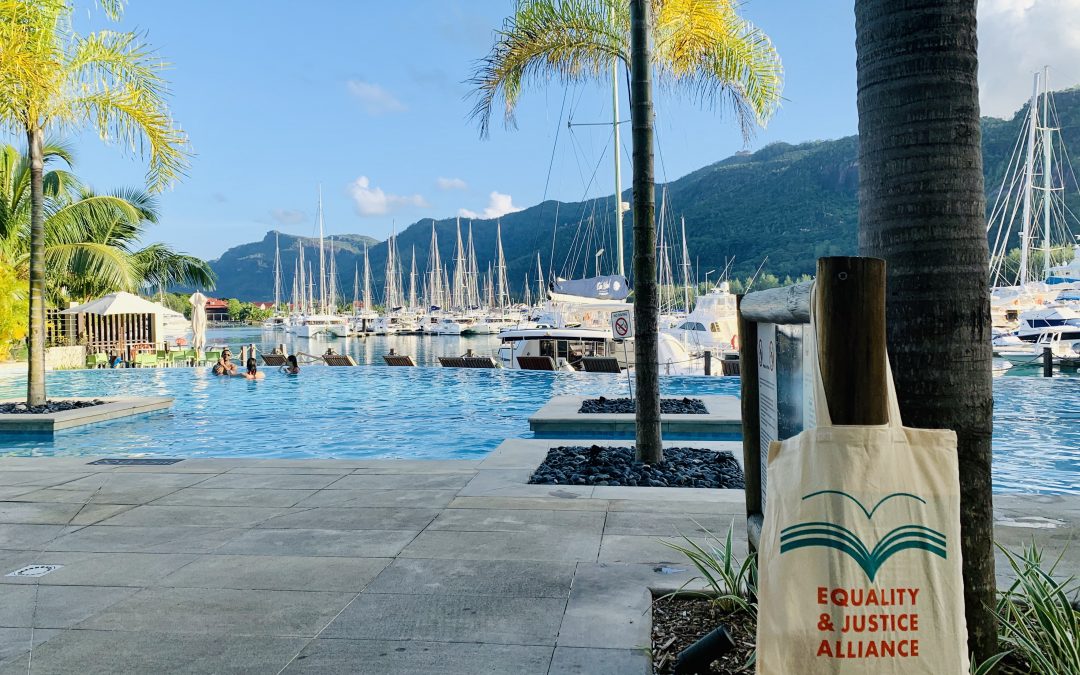 Last week I was at an activist forum in the beautiful location of Seychelles. LGBT+ and women’s rights campaigners from the Pacific, the Caribbean, and Africa gathered together, under the umbrella of the Equality and Justice Alliance (EJA), to talk, share and laugh, in a very nice setting indeed.

The tropical island location has not gone unnoticed, with a sense of guilt, by the participants. There were many concerns that people might judge them for being in such a typical holiday destination, and particular worries of being judged too privileged by those from their home countries. They were worried that it might be seen as too nice for a bunch of human rights activists that, what, I guess feel they are meant to suffer.

It is sad that these tireless individuals, who face death threats, sexual harassment, and the anxiety that accompanies not being able to be with the one you love legally, feel that they somehow don’t deserve to work in a comfortable location. I’m pretty sure that the attendees of Davos do not have these sorts of conversations with each other. There is a certain entitlement in those circles that is clearly not present here.

This forum is work in any case, and arguably much more impactful than what goes on at the World Economic Forum. The EJA was set up as a two year alliance of partners: the Human Dignity Trust who fight for the decriminalisation of consensual same-sexual activity; the Kaleidoscope Trust who uphold the rights of lesbian, gay, bisexual and trans (LGBT) people;  Sisters for Change combatting violence against women and girls through legislative reform; and the Royal Commonwealth Society who champion human rights, equality, and democracy across the Commonwealth. These partners have been working across the globe countries to specifically target the laws that discriminate against LGBT+ people and women.

But let’s not forget that these gender discriminatory laws were instruments of British imperial patriarchy. So, the fact that the donor is the FCO seems fitting, but even potentially hypocritical. I think it’s the very least they can do. Whilst Britain has signalled some regret, no clear apology or unequivocal recognition of the damage of imperialism and the discriminatory gender laws and legal structures that it left behind, has been made. There is still a public un-knowing about where this legal discrimination came from, both in Britain and across the Commonwealth. The history needs to be better understood and acknowledged.

These activists are doing a brilliant job to work towards equality and legal reform. The Live and Let Live campaign just launched in Belize on TV, twitter and Instagram is a campaign promoting inclusion by raising the voices of those who support those who suffer discrimination. The #Reform53 campaign is a youth led movement to compel Commonwealth leaders at the 2020 Commonwealth Heads of Government Meeting (CHOGM) to reform laws that discriminate against women and LGBT+ people. Before EJA, amazing work was being carried out by the independent civil society groups, such as Equality Bahamas, and V-Pride in Vanuatu.

To spread activism knowledge a whole load of research has been produced thanks to the EJA. Good practice, guidance, research and mapping studies have been conducted, such as on creating compliant sexual offences laws, a review of anti-discrimination law and the series launched at the Forum that our own research was part of: Building Stronger Equality Movements, which encompassed research on managing backlash; promoting intersectionality; and increasing intergenerational solidarity.

For our research, which focused on intergenerational activism, we interviewed younger and older activists across ten commonwealth countries such as Fiji, the Bahamas, Botswana, Nigeria and Uganda. They told of the challenges and benefits of working across the generations. Clearly, there is a need to have the wisdom of the older activist generation; communicating the history of what has gone before can benefit younger activists who then know where they have come from, and what needs to be done next. Younger activists can then drive the movement into the future, standing on the shoulders of their forebearers, and creating more strength and sustainability.

Given how long women and LGBT+ people have suffered under discriminatory laws and structures imposed by Britain, how much work the activists do, and how little recognition they get, I don’t even think they should have to justify a meeting in a nice location. They deserve this, and so much more. I’m sure they would swap it to be able to walk down their own streets without abuse. If it wasn’t for these people constantly facing danger, getting up to challenge prejudice and battling in court and against Parliament, many of us would suffer so much more than we realise. Activists’ wellbeing should be a much higher priority to us and to themselves. Many of the participants are volunteers so it is hard for them to even get here or get time off. They deserve what little respite there is.