“Winnie was a rock. They struck her and complained she was too hard.’’ 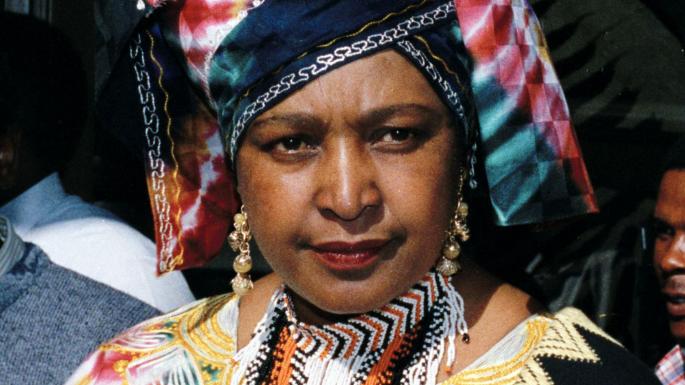 ”Winnie was a rock. They struck her and complained she was too hard.” – Foluke Ifejola

How did Winnie Madikizela’s title fall from ‘Mother of the Nation’ to ‘Terrorist’? As is often the case with many women under the lumbering system of patriarchy, her story seems to begin and end in the light of her husband. Yes, she was once the wife of revolutionary-turned-political-pawn Nelson Mandela, but rarely are we given a glimpse at the full breadth of her remarkable life.

In apartheid South Africa’s rural countryside of Bizana, Winnie was born in 1936 as the sixth girl in a successive line of sisters. From an early age, realising her gender was an inconvenience to her family, Winnie strived to be a female stick fighter, going against the grain in a traditionally male combat sport. After the death of her mother, she temporarily left school and worked the field at the tender age of nine.

When Madikizela became of age she left to the bustling city of Johannesburg to study social work and went on to become South Africa’s first black professional social worker at the Baragwanath Hospital. It was at this time she met the then married Nelson Mandela, sparking a relationship that would last almost 40 years.

Winnie stood by Nelson’s side as he called people to power as leader of the African National Congress (ANC). As he was dragged through the courts of the apartheid regime for his acts of defiance, the South African authorities tirelessly terrorised the newlywed couple and their baby girl. Under the pressure of investigations into her husband, Winnie was let go from her job at the hospital – a wife guilty by association.

In 1960, the Sharpeville massacre, a peaceful protest against passbooks that resulted in 50 deaths when the police force opened fire into the crowd, spurred Nelson to flee as Winnie Mandela gave birth to their second daughter. Nelson was later captured and sentenced to life in prison for conspiring to overthrow the state. In the ensuing 1963 Rivonia Trials, Winnie Mandela, defiantly draped in her traditional regalia, watched as a vacuum opened in the black South African anti-apartheid movement.

Midikezela-Mandela faithfully leapt into the space her husband left as she vowed “I will fight them to the last drop of my blood.’’ She campaigned under the ANC for the freedom of her people and upheld Nelson in the mind’s eye of supporters. Publicly, she spoke to the hearts of people, while covertly she was engaged in the military wing of the ANC. Winnie became ‘Mother of the Nation,’ leading thousands of women, birthing a generation of revolutionaries. She strived to form her own identity out of the shadow of ‘Mandela’s wife’. As a consequence, the authorities set out on a mission to break her in the same fashion as her husband.

In 1969, six years after Nelson was detained, she was sentenced under the Terrorism Act and shipped away from her two daughters. She spent 491 days in solitary confinement where she was degraded, harassed and tortured. In her accounts of her time spent in a cell the width of two stretched arms, she said, “solitary confinement was designed to kill you so slowly that you were long dead before you died.’’ Ill for the majority of her time in prison her lawyers had to appeal to the Supreme Court to allow her food and the right to wash properly. One form of punishment, common for female freedom fighters, was being denied sanitary products so she would be found by visitors soaked in her own menstrual blood.

Upon her release, however, this horrifying experience did not break but rather galvanized Winnie. Reassuming her role, if the Nationalists had regarded her as a threat before, she was a live wire now. As she was gaining momentum, in 1977 she was exiled by the Apartheid regime to Brandtfort, a township in the neighbouring state. Under constant surveillance, Mama Winnie was severed from the liberation movement and unable to work in her open-air prison, being forced to live off donations.

After eight years in exile Winnie was let back into Soweto but upon arrival was surrounded by threats and attempts upon her life. As a counteractive force, Jerry Richardson created and led the controversial Mandela Football Club, a group of young boys staunch on protecting Winnie Madikizela by any means necessary.

Yet Winnie was being attacked on all sides. Scathed by national and international media; she was criticized rather than respected and had to withstand double standards in her personal as well as political life. Despite Nelson Mandela’s numerous early affairs, she was shamed by an alleged affair with Richardson, and despite the violent deaths of thousands of black people and children in the years of the civil war, she was accused of causing the murder of Stompie, a child in Jerry Richardson’s football team.

Still, Madikizela’s tenacity as a revolutionary leader and her integrity as a politician withstood as the men around her capitulated to the regime. With South Africa becoming ungovernable, the Government manipulated a worn-down Nelson Mandela, returning him compromised to his leadership. The now pacified ANC intentionally distanced themselves from Winnie’s ‘radicalism’ that they once embodied. The white Government proclaimed a peaceful handover to a non-racial democracy. However, Winnie did not believe it, and with the fervour of a mother, made a promise to her nation she was not willing to concede. Yet she was conflicted by her duty to Nelson, and she publicly stood by him, walking out holding his hand as he was released from prison in 1990. Two years later she was to be ousted as the first lady as Nelson announced their separation. He would go on to remarry, for a third time, leaving her nothing in his will.

Betrayed by her husband, she was also scapegoated by the party she had fought so hard for. The same year as the separation, she lost her position as head of the ANC Social Welfare Department amid allegations of corruption. She later became president of the ANC Women’s League but her political career was dogged by smear campaigns, and in 2003 she was convicted of fraud. However, the ANC could not dispute Winnie’s popularity amongst grassroots and the poor, spelling her return to politics in 2007 and winning a seat in the ANC National Executive Committee.

Winnie’s contribution to the struggle against apartheid and racism is incalculable and yet her besmirched image follows her more closely than her achievements. Patriarchy tries women, especially black women, for possessing the same gusto as their male counterparts. Amidst all allegations and scandals, her biggest crime was being a black woman who could not be broken. She was slut-shamed, brandished as an international terrorist, and erased from the liberation she led, and the party she had built. This is in contrast to the Nobel Peace Prizes, land, and forgiveness awarded to male puppets and perpetrators. Winnie’s strength was intimidating for its lack of hypocrisy and commitment to real equality.

It is these qualities that I respect Madikizela for. To those who know her story, including me, Winnie will continue to be a deeply inspirational feminist icon. A woman committed to truth, justice and challenging the status quo. Justice Studio salutes Winifred Madikizela and wishes her a very happy birthday – may she rest in power.

Want to give a massive thanks to Nonkululeko Judy Dlamini (@nonkululekojudydlamini), my South African informant and dear friend who gave me great inspiration when writing this piece and increased my reverence of Mama Winnie.